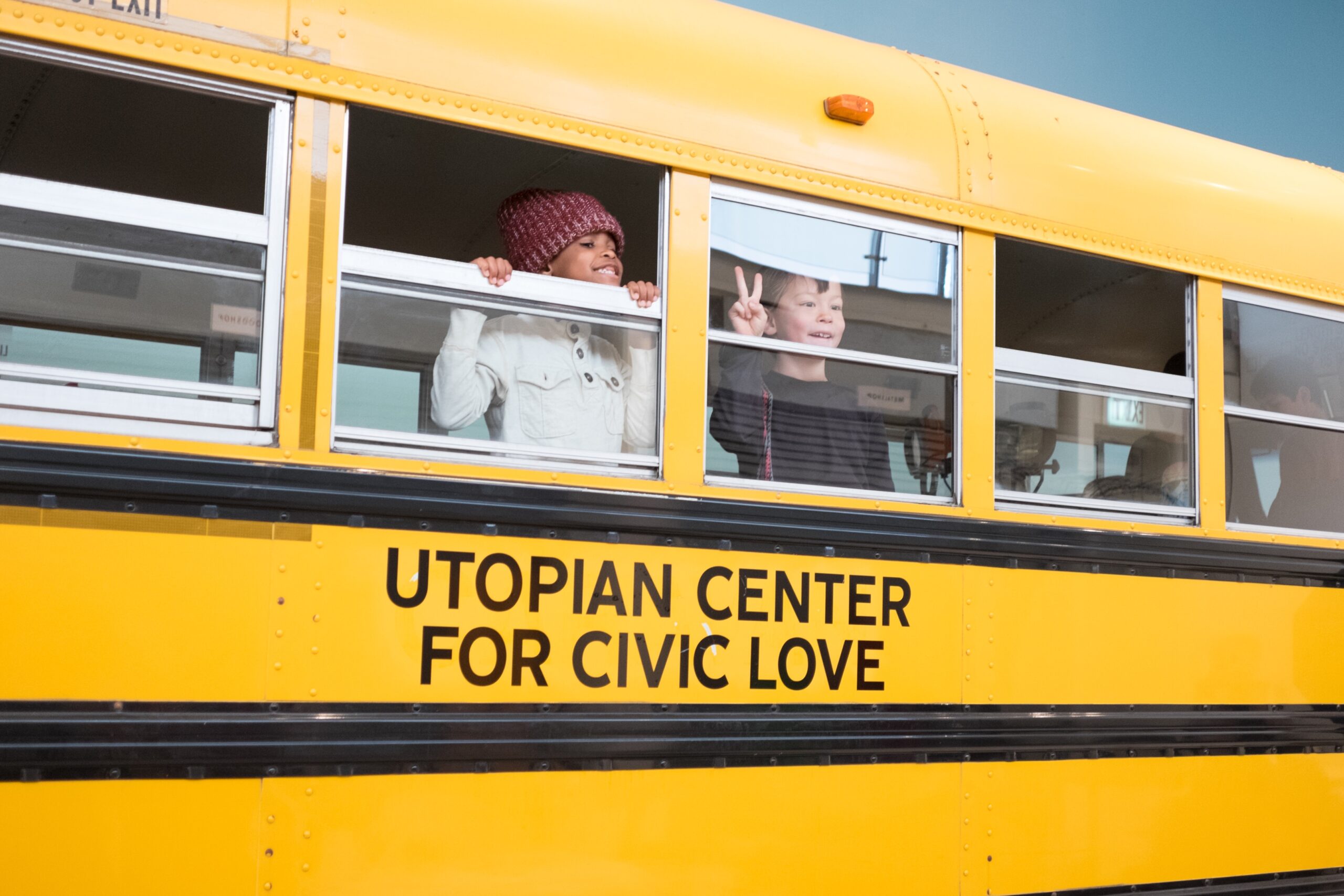 ‘I’ve been working quietly in the cracks of the city my whole life and all of a sudden there’s a kind of light shining that is often too bright and too constant.’

Born and raised on the North Side of Chicago, Jim Duignan has devoted his life to reinvesting in the city’s most under-served communities while developing an experimental, socially engaged art practice. Shortly after an influential interaction with a group of sixth-grade students in the Back of the Yards neighborhood in 1995, Duignan founded the Stockyard Institute, an ongoing artistic and civic collaboration with Chicago youth, community members and artists. Over the past 25 years, Duignan and the Stockyard Institute have engaged in countless community projects to foster lasting relationships, create an open exchange of knowledge and ideas and build infrastructures to support physical and mental wellbeing.

Duignan is currently an Associate Professor of Visual Arts and Secondary Education and Chair of Visual Art Education in the College of Education at DePaul University. He frequently collaborates with the City of Chicago and has consulted on Chicago’s Public Art Plan. His work has been exhibited at the Smart Museum of Art, Chicago Cultural Center, Jane Addams Hull-House Museum and Reykjavik Museum, and has been published in the New York Times, The Art Newspaper and The Atlantic Monthly. The first ever retrospective of Duignan’s work, Stockyard Institute: 25 Years of Art and Radical Pedagogy, will open at DePaul Art Museum on September 9, 2021.

How did you get involved in social practice and civic engagement? What were some of your early inspirations or pivotal moments?

I was in the Boy Scouts for a short period of time, maybe five, six years. At that time in the early ‘70s, it was a kind of ‘nature school’ for me. It was a very independent, pioneering kind of program. All we were doing was being outside and figuring things out and being very resourceful. One of the culminating projects to become an Eagle Scout was to do a community project. I went to the local psychiatric hospital in Dunning, a community I live in now, and I had decided that, with a couple of friends, we would start a Cub Scout pack with the patients at the facility. I always thought that was a kind of ‘moment’ because most of what I was interested in doing was keeping an eye on the boys. At that point I thought, ‘This is an experience that I’m going to deal with for the rest of my life.’ How I put that into practice, I’m not sure. But that was one influential sort of experience.

The other ‘moment’ for me was when I was in graduate school doing an MFA in studio arts at UIC. I met Michael Piazza who was in the program with me. He and I shared this idea of the limitations of conceptual art. We were really interested in making work where we hung out — in park districts, alleys and laundromats, just around our neighborhood. Whether we wanted to build memorials or do publications, we were very invested in everything outside of the studio — making some real things about some real issues. He and I were akin to the same kinds of ideas and pursuits. We always talked about wanting to build projects that were based on our own questions as kids and how school never provided enough time or direction to ask us how we were doing, what we were thinking about, what we loved or what we were curious about, what we were good at or interested in.

You founded Stockyard Institute in 1995 and have worked under that name for the past 25 years. Tell us more about that decision.

Everything’s a collaboration. Our talk right now is a collaboration. I find that to be the ground in which I work best. It is always my intention to have anyone that I am working with share or co- create the questions that we will answer through a project — that’s why I called it ‘Stockyard.’ I didn’t want it to be ‘Jim Duignan’s Next Art Project.’ I like the idea of spreading out and sharing — the creation, execution and distribution of the work.

What do you consider a seminal project for the Stockyard Institute and your art practice?

I love working outside on projects that deal with the parks or the open lands. The quiet, natural spaces; A Plea for Playgrounds was a project I particularly enjoyed. But, a lot of people have been talking to me recently about the Gang-Proof Suit. It was a really early project, but it built an artistic and pedagogical framework for what the Stockyard Institute represents. Some of the answers came about with that project.

It was the mid-90s. I was looking for a space and found this abandoned school at 48th and Damen. A couple of guys were going to start a middle school and they wanted me to build an art curriculum. This was kind of that moment where I was like, ‘Okay, roll the dice, see if this works.’ I met with a group of kids who had all dropped out from local area schools. Most of them were in gangs, so I got this building and I started opening the doors and meeting with them. We hung out there a few times a week. I wasn’t looking to build a project; I told them, ‘I’m not a social worker, I’m not your teacher. I’m an artist and I’m here to do some work.’ And I would have friends pop in too, filmmakers or graffiti writers. The space became activated.

So, I was working with these kids and we were talking about the community. One of the kids said his biggest fear was being shot in the back accidentally on his way to school. It was an opening to build a design studio with the kids without any experience, just me sharing with them as a kind of collective. Over the course of that summer into fall, we started talking and making drawings. We decided we would build a gang-proof suit, something that was fully armored that would withstand straight gunfire that could solve this particular issue.

We began working and making drawings. They were talking about headphones and helmets, so I brought in medieval catalogues and police armor books, pictures and images. It became a kind of war room. The kids felt like they were getting empowered. I said, ‘This is your project. I’m just facilitating it and I’m going to get you whatever we need. If you want to draw better, I’m going to bring in an artist who will help you draw better.’ But I didn’t want to bring the project forward based on some technical apparatus like how to draw. I asked them, ‘What’s the problem? What are you guys thinking about all the time that you can’t talk to anybody about?’ It was all about being terrorized. That was a project where I let the form and the method unfold with me delegating work to the collective. It became a model for how I would do all of the projects. I think a lot of those kids stayed around because of what we shared together. They had people coming in, looking at them and calling them producers. Once you do that, you’ve hooked them.

What keeps you in Chicago? Have you ever considered leaving?

Never. I mean, I’m still exploring parts. I’m not done with it yet. I was born and raised in Chicago and went to Chicago Public Schools. All my loves and all my fears, all the things that this practice has helped me work out are here. That’s been the underlying track that no one really travels on with me or asks me about; it’s about wanting to build relationships that I would have liked to have had when I was young or in school, to work with men who are safe, caring, loving.

The image of being around the city and doing projects in the city, it’s now a circular process of revisiting things 10 years later, 35 years later, 50 years later. Once I sort of dig in and go into buildings and find the context, these wonderful stories and conversations appear about other people who have chosen to stay in the city or use the city well or are encouraged by what I want to do. Those are the quiet parts that aren’t usually illuminated in the work, but that’s what I like. Saying, ‘Hey, you still around there? What are you doing? You need any help?’ Old school considerations.

Is there something unique about Chicago that allows you to do this kind of work?

I just thought it was always easy to do. I could find free places, I could find free materials, I could find people who were willing to experiment over a summer on something. I think part of that was just being here my whole life, driving around with my dad on the South Side delivering newspapers — being really independent at a young age, getting on the buses and checking places out. I think I was always priming myself, always doing this. I never had a name for it or thought of it as a project. I thought of it as a practice.

What’s next for the Stockyard Institute?

I’m hoping that it connects directly to artists and teachers around the city. This is just my vantage point, but I think most of my energy will certainly be in helping people or established artists, teachers and teaching artists to think about pedagogy. That’s what entangled the Gang-Proof Suit project; it was a studio art project and I thought of it as an artwork, but it was really wrapped up in art or an act of teaching where most of my effort was about being completely resistant to making any move as an authority. That just unlocked more questions for me to solve.

I think that’s where I see myself — helping. I’m in the Back of the Yards and there’s a lot of stuff happening there. I’m looking at a space that could be a central, public space in the city where we could bring a bunch of different kinds of people together. A neutral ground. The projects we’re doing in the Back of the Yards now are going to be more about work readiness, working with parents, working with the whole family, finding jobs, getting local corporations involved and invested. We’re building a kind of circle. That’s what I’ve been thinking about.

Tell us about your perfect day in Chicago.

Summer. Some time right in the middle. Maybe being near the lake, wandering, having the whole day open, big sky. That was my favorite day as a kid, just running out the front door with no plans. I’d just have to be back before the streetlights came on. That was magic for me, running at a swing or running through the park as fast as I could. They seemed like rebellious acts of freedom — there were a lot of people in my house — and I loved that, I still do. I like the quiet. I think equally, in terms of energy, I like working with youth. I like working with groups, seeing what they’re thinking about and helping them figure out how to get from here to there. How to use Chicago to their advantage. I’m an expert. That is my area of expertise, where to find things and how to use the city.