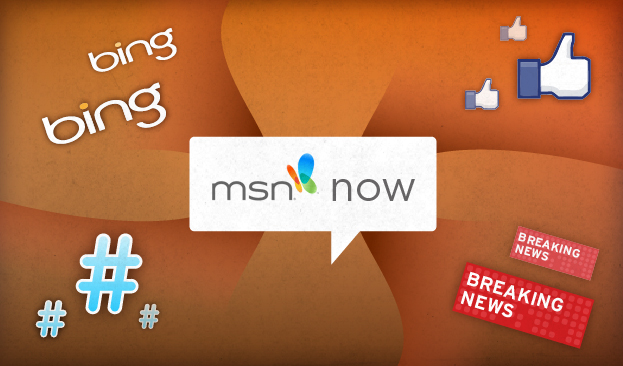 Microsoft recently launched a new social media site msnNOW to track the latest news trends aggregated from Twitter, Facebook, Bing and BreakingNews.com. The new third party site claims to be “the first service designed to surface breaking trends from across the Web, show what people are saying about the trends and why they matter with the help of expert editors.”

There are 20 editors monitoring the data and creating content for msnNOW in 100 words or less. These short descriptions provide snapshots of the stories with posted links to full news stories across the web. In addition, the editors are annotating posts by correcting false information that surfaces, which hopefully puts a stop to false accusations that seem to spread like wildfire through social sites like Twitter and Facebook. (A prime example is a tweet by Damian Abraham of a Toronto punk band.)

By leveraging msnNOW, Microsoft is attempting to become a news resource for the “info-snackers,” which describes a younger generation of users between the ages of 25 to 40 who spend no more than five to ten minutes browsing a site. To target the younger audience, msnNOW categorizes trending topics by FAME, SWEAT, CASH, SOUL and WIRE. Unfolded, those categories include entertainment, sports, finance, lifestyle and daily news stories. Currently, there isn’t a social media news source on the market for “info-snackers,” which suggests great potential for msnNOW to become the news resource it aspires to be.

I have some reservations around the potential for this new site to gain traction. First and foremost, will users take the initiative to use a third party site to receive trending news when they are already using Twitter as their primary news source? If users think the information they receive on primary social sites is enough, a third party site like msnNOW might not receive the traction that is expected.

msnNOW will require an aggressive marketing strategy to attract high traffic levels. With Bing falling behind Google and Yahoo in search volume, it’s hard to imagine that users will engage with the site over the more popular news sites like Mashable, New York Times, Wired and Forbes.

“Info-snackers” are looking to social media platforms like Twitter and Facebook for the latest trending news updates because these social sites are providing breaking news before the conventional news sites. For instance, when Whitney Houston passed away, the public didn’t find out through television or mainstream news sites. Instead, the tragic news broke on Twitter thirty minutes before the Associated Press reported the story.

On the other hand, being the first to report doesn’t guarantee the content is accurate, as was the case when millions of Twitter users wrongfully acclaimed death of Joe Paterno a full day before he actual passed away.

In the end, the success of msnNOW hinges on how successful it will be in establishing itself as a go-to resource for accurate, real-time news in the digital world, functioning at the intersection of the news and social media industries.

Are you using msnNOW?