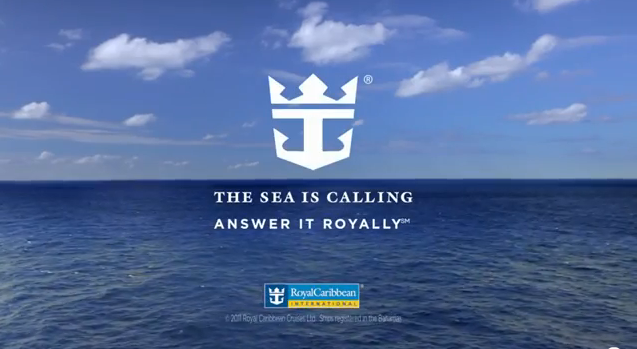 Recently, I’ve seen several TV spots and video clips for Royal Caribbean’s new campaign “The Sea is Calling. Answer it Royally.” In the commercials, people use a conch shell to talk with the sea, which is personified by a cheerful female voice that invites them to visit her and relax.

What really stands out for me is the way Royal Caribbean has established this emotional link to the sea and executed its message across a broad creative spectrum including not only TV spots and online videos, but also digital ads, social media, and even a New York City subway wrap.

The message, which comes from research and focus groups in 16 countries, is simple: people feel connected to the sea, and the sea offers detachment and relief from life’s daily hustle and bustle. The campaign’s theme “Answer it Royally” responds to people’s perception of Royal Caribbean being best in class, including choice of destination and quality of service. This tagline easily communicates this simple truth of how people feel towards both the sea and the Royal Caribbean brand. The theme’s emotional link, as well as its ability to be easily translated and understood in other languages – allows the campaign to resonate on a truly global scale.

In December, Royal Caribbean teased out its new campaign by announcing a Shellphone that would run on a Sea G network. News about the latest phone tends to receive a lot of hype, and the Shellphone teasers were the perfect way to create buzz about the campaign in anticipation of its launch. Shortly after the announcement, the campaign followed through with an unveiling video that revealed the Shellphone, which turned out to be a seashell. The user also flipped through the “user manual,” which was cleverly composed of the campaign’s digital ads using witty wordplays such as “You don’t recharge it. It recharges you.” and “Our rollover plan: tan front, then back.” At the end of the video, the user received a call from the Shellphone, after which he whispered, “The sea is calling.” At last, the campaign’s tagline was revealed.

The current commercials and videos really help bring the voice of the sea to life and capture all the nuances behind the campaign: people who have been so busy they haven’t had time to relax, the positive connotations associated with the sea, and the services that Royal Caribbean has to offer. Once people pick up the ringing Shellphone, a female voice responds with a cheery “Hi! This is the Sea calling.” When the Sea asks when was the last time people visited her, responses include “Hustle and bustle” or “I work all the time.” The Sea then invites people to imagine they’re “out in the middle of me … where people wait on you, for a change.” The videos rolled out with “themed” versions for the winter cold and for Valentine’s Day, rendering the messages even more relevant and relatable.

In addition to the commercials and video, design plays a huge role in raising awareness for the campaign. Earlier this month, the New York City’s Time Square shuttle underwent a “makeover” where the interiors and exteriors were designed to resemble an actual Royal Caribbean cruise ship. This subway wrap is one of my favorite elements to the campaign, as it physically places subway commuters on the cruise ship, giving a more intimate glimpse of what it may feel like to be a passenger on one of the ships.

And in today’s Relationship Era, where consumer-brand interactions matter most, Royal Caribbean’s Facebook page takes full rein with what it means to engage with its followers by offering a strong reason for people to like the page. In addition to special deals and offers, those who like the page are entered in a sweepstakes to win a cruise. It also features a fan-exclusive Royal WOW of the Week section, which invites people to submit their memories and experiences of cruising with Royal Caribbean, and each week the page spotlights one cruiser’s experiences.

The daily wall posts are also engaging, encouraging fans to participate or comment. From word scrambles to polls, and even a scavenger hunt that asks fans to submit photos of their finds while riding the royally decorated Time Square shuttle, posts are fun and as a result, are receiving hundreds of likes and comments. Word scrambles unveil one of the Royal Caribbean’s ships or a venue within the ships, which helps educate fans about the brand. Polls are a clever way to solicit fans’ preferences regarding a certain service or cruise experience, which ultimately helps Royal Caribbean better understand its consumer demographics.

The Facebook page is as informational as it is engaging, showcasing videos about a Royal Caribbean cruise destination or a blog post by President and CEO Adam Goldstein; even these resource-like posts receive plenty of fan engagement. All in all, Royal Caribbean seems genuinely interested in what their fans have to say and encourage them to give input or share their comments about the brand.

Royal Caribbean’s use – and integration – of a wide range of media paves way for multiple outlets, none of which would be as successful on its own. Plus, the campaign’s multiple channels help attain a wide global reach by piquing curiosity, bringing visibility and awareness and communicating its brand message. Its smart use of social media keeps its fans constantly connected by offering them engagement and interaction with Royal Caribbean and its brand message. As this campaign is fairly new, it’ll be interesting to see how it continues to unfold and impact the brand in months to come.

What are some of your favorite marketing campaigns?