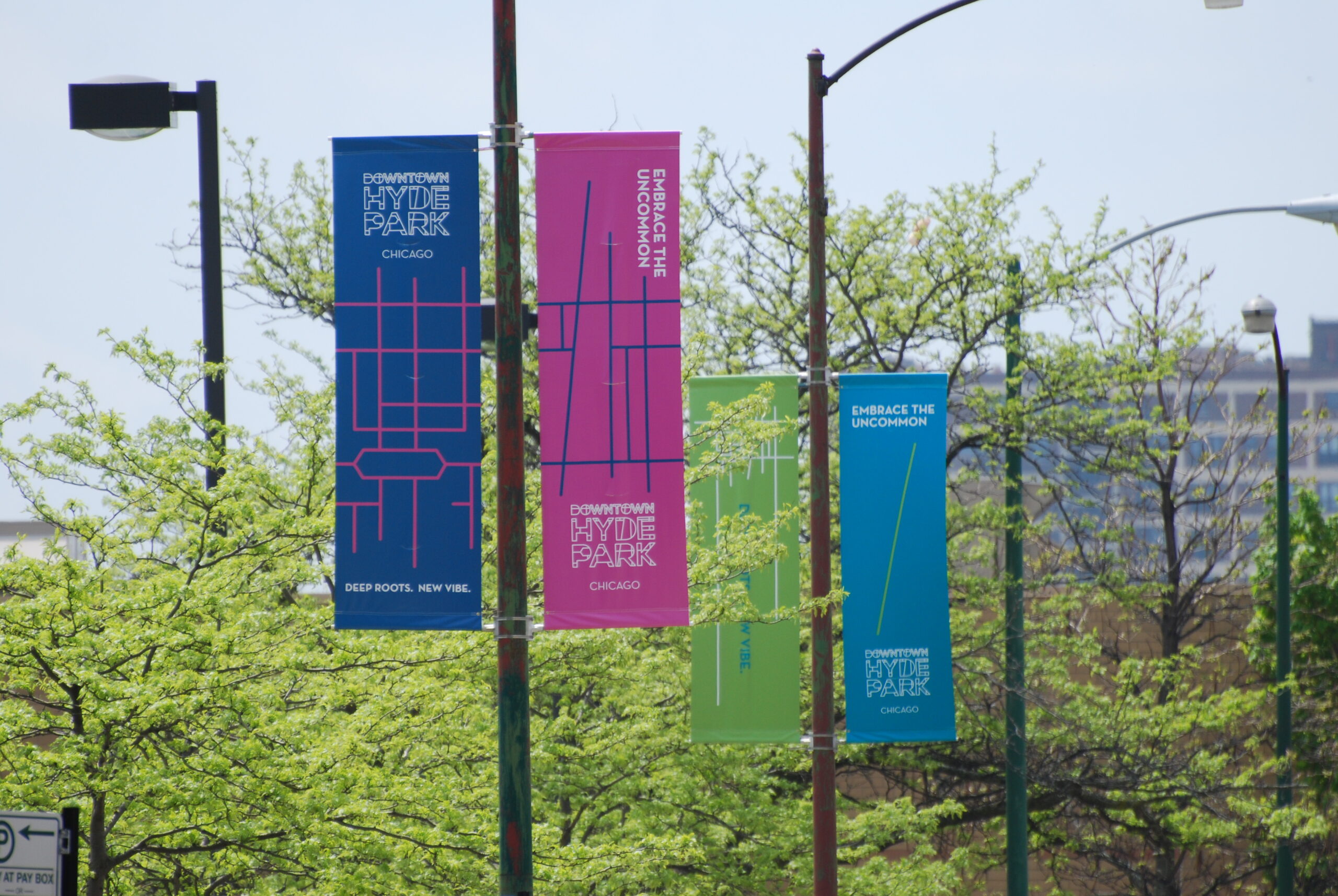 It was 2015 when the South East Chicago Commission (SECC) approached Otherwise to market Hyde Park’s commercial district as an entity — and through that collaboration, the Downtown Hyde Park brand was born. Six years later, we caught up with Diane Burnham, Executive Director of SECC, to discuss the brand’s evolution, and the thoughtful balance being struck between branding a commercial district and serving a whole neighborhood.

For starters, it’s important to distinguish the layers of involvement here. The SECC is a community-driven non-profit organization focused on enhancing the quality of life in five neighborhoods on Chicago’s South Side (Hyde Park, Kenwood, Oakland, Washington Park, and Woodlawn).

In 2014, the SECC was awarded Service Provider oversight of the Special Service Area (SSA) #61 Hyde Park. City of Chicago SSAs, also known as Business Improvement Districts or BIDS, are local tax districts that fund expanded services and programs through a localized property tax levy within contiguous areas — in the case of SSA #61, this area is the 53rd and 55th Street corridors connected by Lake Park Avenue.

SSA #61’s services include beautification and maintenance, business district capacity building, economic development and district marketing. When the SSA wanted a brand identity strategy, Otherwise was called upon for its expertise.

Through SSA #61, the SECC simultaneously engages the interests of elected city officials and area taxpayers, as well as the desires of consumers coming from outside of the area to visit. Ultimately, these numerous interests feed one another — when visiting consumers enjoy their destination (Downtown Hyde Park), it spurs economic growth and development, and this economic mobility in turn improves the breadth and depth of SSA #61’s service offerings that better the whole neighborhood.

An Evolving Destination and Culture

In our branding work, we coined the tagline Deep Roots. New Vibe., celebrating Downtown Hyde Park as host to a storied history and ample shopping, dining and cultural destinations that help to rally the local community and to draw in visitors. Since our work together, Burnham shares, “Downtown Hyde Park has morphed into a destination, and so much more. We get a lot of momentum around Downtown Hyde Park in terms of social media check-ins from those visiting.”

Burnham speaks to the evolution of the commercial corridor’s makeup, sharing: “What attracts people to Hyde Park is the diversity of the region, its many arts and culture institutions, and of course, the entertainment and dining options. Over the last few years, the culture of the footprint has largely remained a mix of small businesses both old and new, but we’ve also seen several new nationally-recognized brands such as Target and Ulta coming into the area. These franchises often follow the larger, mixed-use developments that are popping up, such as Harper Court, VUE 53 and City Hyde Park.” Growth in the neighborhood also includes the expansion of the University of Chicago campus, and the introduction of the Obama Presidential Center, which will break ground in 2021.

“Today, the demographic and dynamic of Hyde Park is really evolving. But it still has the core foundation of long-term residents who have lived here for 30+ years — those that are homeowners, who have raised their children here, and themselves went to schools in Hyde Park,” reflects Burnham.

She is mindful of this change and its impact, sharing: “We know that not everyone has embraced the Downtown Hyde Park brand and we are aware of the sensitivities in our community.”

“The SECC has been in the community for almost 70 years. Serving in the surrounding communities, we work hard to make sure the investments and economic impact from Downtown Hyde Park spread out to the surrounding footprint,” she shares.