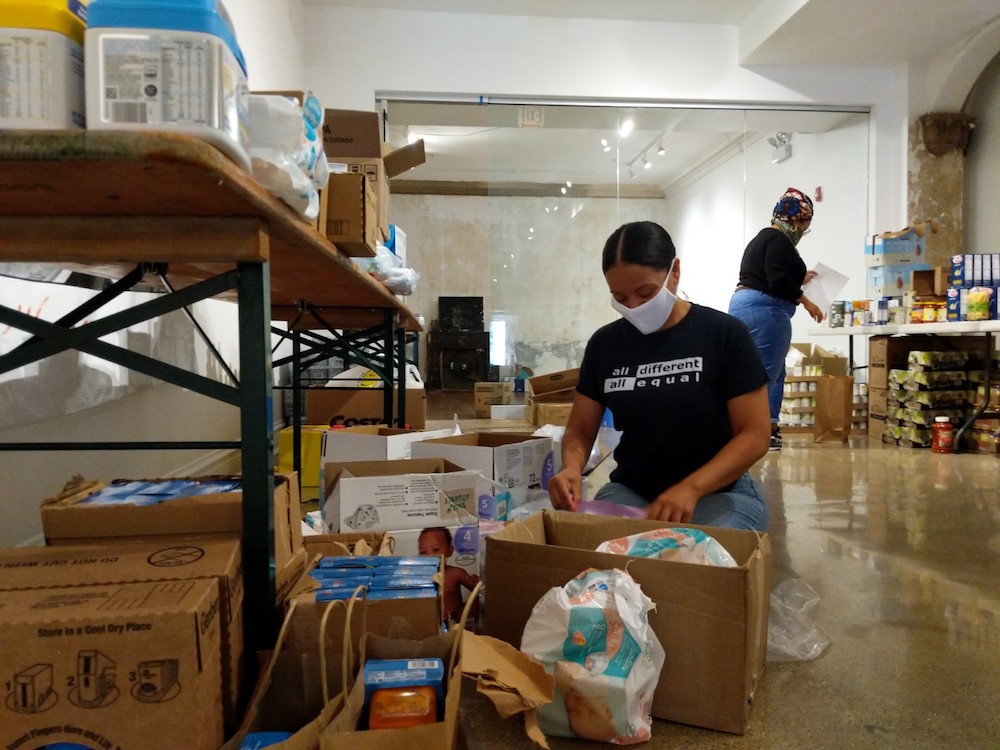 We started out our last post with a protester’s sign that read: A better world is possible. As Chicago seeks to heal, to learn and to grow, local community-led organizations are making sure that statement rings true. After the pivotal weekend that closed out May, The Neighborhood Network Alliance (NNA) and Rebuild Foundation joined forces to create a food bank in the South Shore — led by the community, for the community.

Our team has been lucky enough to back their efforts and join them as volunteers, making deliveries to neighbors and manning a phone bank. Inspired by the power of their mobilization and the community’s response, we spoke with Val Free, Lead Steward at The Neighborhood Network Alliance, and Julie Yost, Director of Public Programming at Rebuild Foundation, to explore how the impromptu program began, and how they see it growing from here.

Mobilizing a Community, Making a Plan

The NNA dubs itself “next level block club organizing.” And what makes them so agile is this component of partnership, Val Free explained to us. “As a network of neighborhood organizations and community members, it’s very easy to tap someone on the shoulder and say ‘I need to do this, let’s do it together.’”

That’s exactly what happened after the last weekend in May, when protests and riots brought chaos and uncertainty to neighborhoods. “The first Monday after, we did a cleanup that began as a quick phone call on Sunday night to organize,” says Free. The call came from the South Shore Chamber of Commerce, asking for help to clean the business corridors, and from there, NNA coordinated with community members and partners. “The next day, over 70 people showed up for the cleanup,” says Free. Together, passionate community members helped to protect and clean a local grocery. “From that momentum, we joined forces with the Rebuild Foundation; the operational mechanics of it came from Rebuild but the people came from both sides,” tells Free.

NNA and Rebuild Foundation — Free and Yost — discussed how to work together to broaden their reach, and best serve the community. From that first Monday cleanup, their efforts evolved into the community food bank. “It became apparent pretty quickly that access to food was starting to be one of the most immediate needs in the neighborhood,” says Yost. “We [Rebuild Foundation] offered up the Arts Bank for the purpose of housing the supplies and being the home base to get all these deliveries out.”

Free managed the hotline numbers while Yost determined the backend logistics, with some help from old members of The Black Panther party. “I did lean on the expertise of our olders,” says Yost. Inspired by The Black Panther’s breakfast program in the 60s and 70s, Yost learned what questions to ask community members to determine distribution needs.

The NNA and Rebuild Foundation intend to continue the community food bank through the end of June, for starters. Volunteers continue to work the phone bank during the week, while others drive and deliver food on the weekends. The response from community members has been phenomenal, according to Free. Everyone is appreciative to both give and receive support, and deepen their relationships with each other and with the community along the way.

“As for the numbers,” says Free, “it’s not enough. There truly can’t ever be too many of us out here doing this work. The need is great.” She goes on to say, “I’m looking at this [work] as long term, because the issues are long term.” As the NNA and Rebuild Foundation move forward with serving the community, it’s vital to spread the word, to gather more volunteers for driving and calling and to collect greater funding to sustain their efforts.

Beyond their direct efforts, Yost urges people to consider how their support of Black Lives Matter can be lived on a daily basis, particularly in a city as systemically racially divided as Chicago. She encourages people who are unfamiliar to come to the South and West sides of Chicago, to become patrons of these incredible neighborhoods, businesses, cultural venues and outdoor spaces, to invest in the community and become connected, to help Chicago regrow better together.

You can volunteer with the NNA’s South Shore Recovery efforts here.

You can also join Rebuild Foundation on June 19th at 5:30 PM CST for a Juneteenth concert at ess.org. All proceeds will benefit the Tamir Rice Foundation.