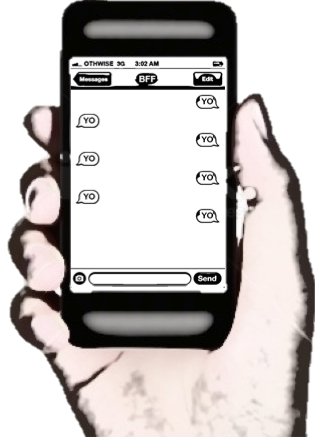 How many people are rolling on the floor laughing when they send a text with “ROFL?” This is one of a slew of phrases that accompanied the birth of online messaging.  Abbreviated phrases are widespread and well-accepted parts of the English language—idk how many there are. No longer solely the vernacular of teenagers on AIM, they are used in the workplace, words in the dictionary. However, a new wave of messaging reveals further transgression from ordinary dialogue—applications that allow its users to communicate with only one word.

Most notably: the app, Yo, worth over $1 million dollars. With a tagline, “It’s that simple,” it really is that simple. The app allows users to send one word (unsurprisingly): “Yo.” A modern day beeper, it’s used to buzz your friends with a “Yo.” However, the app is already evolving. If you add the user, WorldCup, you receive a “Yo” for every goal. From grabbing someone’s attention, to sending a quick hello, it proves sometimes “Yo” is the only word you need to communicate.

However, if “yo,” isn’t your word, then maybe you’re a Game of Thrones fan. Akin to Yo, the app Yo, Hodor, allows users to send only one word to each other: “Hodor.” This app is another form of one-bit communication: “a message with no content other than the fact that it exists.” There are other one-word apps, including Meh. Although these may sound senseless, they hold power. The translation of one-word communication is something that only exists between you and the receiver because only you two know what you’re talking about.

Furthermore, if one word still feels too complex, then the new app, Emojli, an emoji-only messaging app should ease your worries.  Not only will conversation consist solely of the already beloved emoticons, but also your username will be made of emojis, and over 10,000 people have already signed up. Although the release date is unknown, it is yet another messaging platform breaking traditional norms.

It is arguable these apps are not intended for quicker, nor more frivolous correspondence. Rather, they create a new and more personal discourse. The overly simplified messages have alternate meanings than if they were written out, and they vary amongst people. The word, “Yo”, does not literally mean the dictionary definition of yo. Likewise, perhaps an entirely new alphabet exists made of animal emojis. And herein lays the power of these apps: in the reduction of communication there is the expansion of expression.

Erica Grubman is a Project Manager at Otherwise Incorporated.