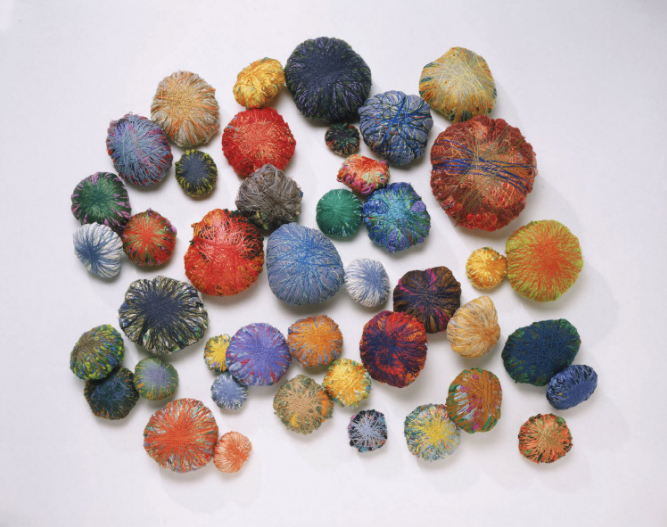 According to a recent report by the National Endowment for the Arts, participation in the arts contributes to the social-emotional development of children by introducing them to concepts through collaborative activities such as dance, theater and visual arts and crafts. At Lycée Français de Chicago, a private bilingual school offering French immersion for K-12 students, the arts have always been a cornerstone of the curriculum.

As part of its founding philosophy, the Lycée has had a world-class Artist-in-Residence Program, inviting artists from around the globe to collaborate with students and teachers on creative projects. For the 1999-2000 school year, American fiber artist Sheila Hicks used the theme of “Treasures and Secrets” as her point of departure to engage students in conceptual activities that examined the relationship between art and culture.

As the founder of the Lycée’s Artist-in-Residence Program and co-curator of the Hicks project, Nancy Lerner lead the charge to integrate the Otherwise design team into the project. From the outset, our goal was to document the project through the experiences of the students, and to transform those observations into an artifact that could be shared with others. The result was an outstanding creative campaign that was recognized as Best of Show by HOW Magazine’s 9th Annual International Design Competition in 2001.

Hicks began her project with a series of workshops during which students of every age were asked to bring in a stone that symbolized a private memory or “secret” and a favorite piece of clothing to decorate the stone in order to create a “treasure.”

This workshop challenged students to explore how thoughts are communicated. Of course, there is the very literal interpretation of turning an inanimate object like a stone into something vibrant and animated, but there is the added symbolism of a private thought being displayed publicly and seen as something beautiful. The promotional poster we designed heightens that message by showcasing a single wrapped stone — taking an object that was 3” x 2” in size and making it appear to be monumental. We surveyed the entire body of 300+ wrapped secrets — and selected one that resembles an exquisitely clad human heart.

Through classroom discussions, the students began to consider what defines a treasure. As with all Artist-in-Residence projects at the Lycée, the teaching staff worked closely with Hicks to integrate literature, history and science into the process of inquiry. Hicks and the faculty then took the students on on a series of expeditions into Chicago’s diverse neighborhoods to collect artifacts and document their trips with field notebooks, printed maps and disposable cameras they were provided. These expeditions allowed the children to experience the fabric of the city and begin to contemplate how individuals come together to create a community. To celebrate this interactive and game-like exercise, Otherwise created a deck of 40 cards that include the students photography, maps and findings.

The cards themselves offer up a game-like experience; we designed them with slits and holes so they can be linked or strung together with a piece of thread. We also created a visual navigation coding system that offers a different way to interactive with the cards. In this way, we celebrate the idea that numerous cultures come together to create one diverse city and evokes the playful quality of making up your own story. And with our sensitivity to the Lycée’s dual culture, we designed the cards to beautifully present the texts in both English and French with parity. We produced 1,000 card sets that were distributed to students and their families, faculty and all the people we met during the neighborhood explorations.

At the end of every Artist-in-Residence project at the Lycée, the student’s work is showcased at the school’s annual gala, the Soirée Des Arts. As part of the project’s culmination, we worked with Hicks and Jean-Brice Wallon, head of the Arts program at the Lycée, to create a massive installation of all 300+ wrapped treasures at the Chicago History Museum, where it was on public view for six months. Otherwise then designed the invitations and other event collateral to evoke the magic of discovery as the central notion of the “Treasures and Secrets” project, with the invitations sliding out of a sleeve to reveal event information and depictions of student’s work.

Otherwise’s involvement in “Treasures and Secrets” ran parallel to Hick’s residency, which took place throughout the school year. This allowed the Otherwise team to get close to the process, while being free to bring our unique tools of design and creative conceptualization to the project. In the end, the collaboration gave students the opportunity to use art to think about larger real-life concepts, while the innovative contributions from Otherwise enabled them to regard their work as objects of art.