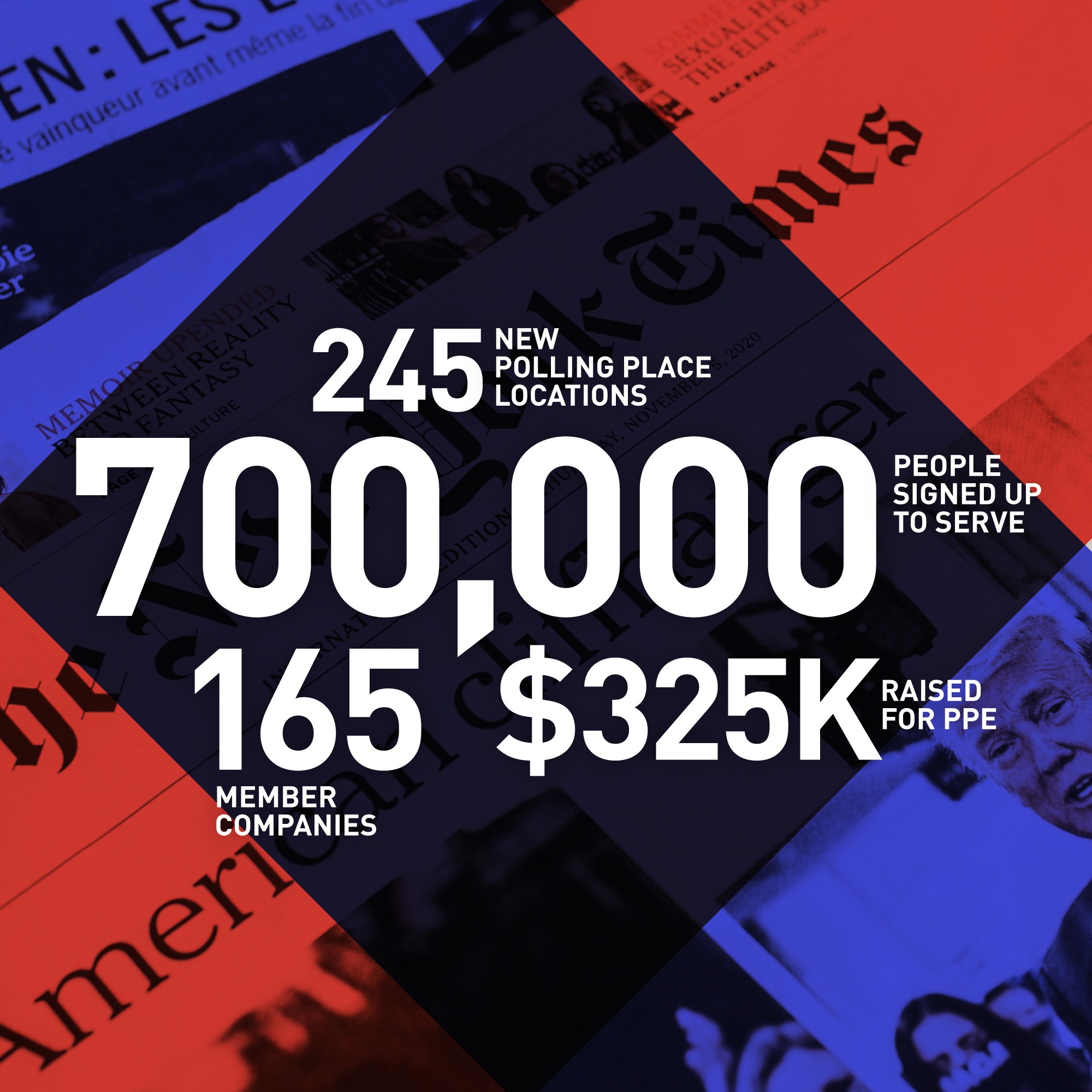 The past several months, Otherwise has been working proudly alongside Civic Alliance to increase voter engagement and turnout — for this election cycle and beyond. And while there’s still much work to be done, we want to take this moment to celebrate our journey and successes thus far.

We were one of 165 member companies that took action in the Civic Alliance Election Day of Service initiative to recruit poll workers through Power the Polls, to locate new physical space as polling places or ballot drops, and to fund critical PPE needed for poll workers. Through Civic Alliance, over 700,000 people signed up to serve, ensuring that election administrators had the support they needed to serve voters across the country.

Civic Alliance was also able to offer local jurisdictions 245 physical spaces to serve as voting locations, laying a foundation for use this year and beyond. And last, Civic Alliance facilitated the donations of $325,000 in funding for PPE, 560,000 ounces of hand sanitizer, 160,000 masks and 6,000 face shields to 12 states, ensuring safe elections for all.

Otherwise Brand Strategist Abby Seiple volunteered as an Election Judge at her local polling place. “Working the polls certainly gave me perspective on the inner workings of democracy,” she says. “The day started out a little chaotic with some technical difficulties, but my fellow poll workers pulled together to figure everything out. The hours of training and the long Election Day shift were worth it to experience the power of everyone — whatever their political beliefs — working towards a common goal of a safe and fair election.”

Otherwise Cofounder and Chief Brand Strategist Nancy Lerner says of her own experience, “In preparation for being a rookie Election Coordinator on November 3rd, I spent the summer and fall months leveraging my personal and professional relationships to recruit company leaders across the country to implement an Election Day of Service in their organizations — enabling us to onboard their employees who served as those 700,000 new poll workers! The combination of large-scale strategic organizing and hands-on, down-to-earth experience — with a team of 8 Election Judges in an elementary school gym in Chicago’s Bucktown neighborhood — enabled me to experience first-hand the power of our democracy when we share common ground.”

Through these efforts, we played our role to contribute to the highest voter turnout in over a century. Two-thirds of all eligible voters (nearly 160 million people) showed up to the polls this year and made their voice heard. Credit is also due in large part to all the organizers, activists and voices rallying for change that led to the record breaking levels of engagement and participation seen this year.

We’re feeling incredibly inspired by what’s happened so far. And we’re excited to continue our close association with Civic Alliance and fellow member companies as we strive for a more engaged, democratic future for all. This is just the beginning!