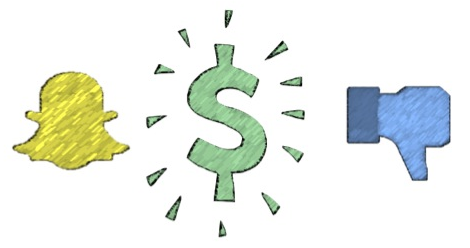 If ‘selfie’ is the most popular word of 2013 (come on, even Obama does it), then Snapchat is the answer to the obsession of self-portraiture. Snapchat allows its users to easily exchange photos and videos rapidly without the fear of permanence in cyber space. It seems not a day passes without the self-destructing messaging application making headlines. Most recently, Snapchat gained critical attention for turning down Facebook’s offer to purchase the app for $3 billion dollars. As a fellow 23 year old, it seems incomprehensible to me that Snapchat’s co-founder and CEO, Evan Spiegel, walked away from such a generous offer from the mega-entity of Facebook. The first job of most 23 year olds barely covers the cost of rent. However, Spiegel is not like most 23 year olds. In fact, just three classes shy from his graduation, he dropped out of Stanford to pursue Snapchat, an idea supposedly started while discussing the desire to send easily erased pictures with his fraternity brothers.  However, what began as a convenient way to avoid embarrassment started a revolution in the way we communicate with others.

Snapchat creates a new space to talk with others through the world of ephemeral messaging. You can send your most intimate, goofy, or artistic creations (it allows users to draw on their photos), all the while knowing whoever you send it to will only see it for a maximum of 10 seconds. Snapchat is widely popular, with over 400 million “snaps” sent each day. It is available internationally and on both Android and iOS interfaces. Most shockingly, Snapchat currently generates no revenue.  There are no advertisements on the phone and the application is free to all users. So, why would Spiegel turn down such a generous offer?

Besides, for Speigel the amount Facebook had to offer likely did not influence his decision. As Larry Page, CEO of Google, said, “If we were motivated by money, we would have sold the company a long time ago and ended up on the beach.” Speigel is only 23. He is not ready to retire and his company’s potential does not hold monetary value. Snapchat is his baby, his prodigy. To abandon it to a large sum of money does not match his ambition.  Why sell to Facebook, when his creation could be the next Facebook. He wants to change the way in which people share personal information, even more than he already has.

Erica Grubman is an Integrated Market Associate at Otherwise Incorporated.